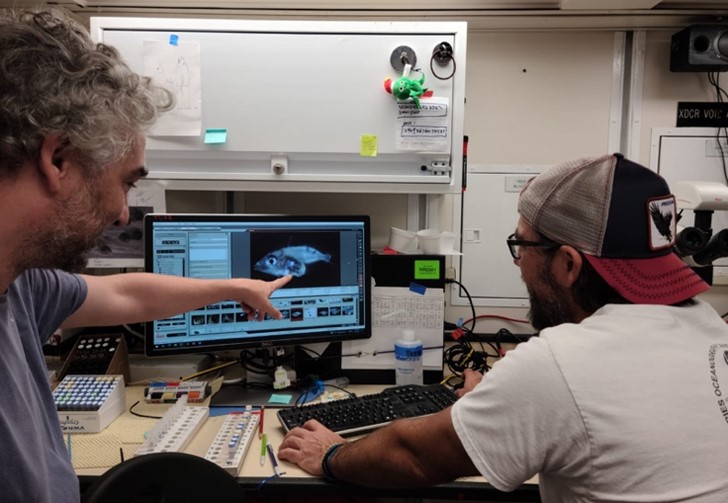 We are Dr. José María Quintanilla and Dr. Raúl Laiz Carrión, researchers from the Fish Larval Ecology group at the Málaga Oceanographic Center, Spanish Institute of Oceanography (IEO-CSIC) integrated within the Spanish National Research Council (CSIC). During the past decade, our group focused on trophic ecology on early life stages of small and large marine pelagic fishes such as, sardine, anchovy, hake, bullet and bluefin tunas. Our goal is to examine the influence of environmental conditions, food availability, trophic variables and maternal influence on larval growth variability, and consequently, their survival and recruitment.

We were fortunate to participate in this historical international and multidisciplinary BLOOFINZ survey, invited by Rosenstiel School of Marine and Atmospheric Science, University of Miami (RSMAS/CIMAS) and the SCRIPPS Institution of Oceanography, University of California San Diego (SIO/UCSD). (See Press release). Our working hypothesis is that environmental and trophic factors affect southern bluefin tuna (SBT) and subsequent daily growth. This variability reflects not only how trophic conditions and growth are influenced by the ecosystem´s partitioning of food resources and by hydrographic processes, but also by the effects of climate change on spawning and larval habitats. This hypothesis will be tested on a multispecies approach with other tuna species (yellowfin tuna, bigeye tuna, albacore and skipjack) to understand resource partitioning and how it affects growth potential, survival and recruitment for the only known worldwide spawning ground for SBT.

We have an extensive ongoing collaboration with UM, SIO and NOAA-SEFSC-Miami in different projects trying to better understand Atlantic bluefin tuna larval ecology. We studied larval age and growth, feeding ecology, genetics and trophodynamics, under a comparative agreement between the Mediterranean Sea and the Gulf of Mexico ECOLATUN project (2016-2020), synthesizing the current knowledge of larval survival on oligotrophic (food-limited) habitat. We also participated in the RESTORE project (2017-2019) in close collaboration with our colleagues from California and Miami helping to assess the effects of nitrogen sources and plankton food-web dynamics on habitat quality for the larvae of Atlantic bluefin tuna in the Gulf of Mexico.

We want to make a tribute to the instruments lost in action, serving marine science, such as the prized CTD and especially our beloved “Black Widow”… Rest in Peace in the Indian Ocean Seabead (-5000 m).

Some details about us: 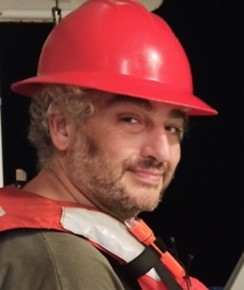 José Mª Quintanilla. I got my MSc in Biological Sciences in the Complutense University of Madrid (UCM). After some years as a collaborator of the zoology department in the UCM, I started my professional career in 2004 with a contract in the laboratory of Málaga of the Spanish Institute of Oceanography (IEO-CSIC) to assess environmental optimal windows for eggs and larvae of small pelagic fish. In 2005 I was hired with another contract concerning environmental factors and larval growth of tuna larvae. During these contracts, I focused my research on larval sclerochronology through the analysis of the microstructure of otoliths in order to estimate larval age based on daily increments. In 2008, I gained a permanent employment contract in the Fish Larval Ecology group of Málaga (IEO-CSIC) to continue my research in larval growth and its ecological implications. These activities represented the main research object of my PhD (2016). “-JMQ- I’m very pleased to participate in this survey and be able to test our hypothesis of work for southern bluefin tuna and other tuna species.” 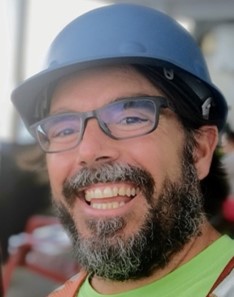 Raúl Laiz Carrión. I began my career in fish physiology focusing my research on the molecular and endocrinology process controlling the stress response and the energy metabolism of fish adaptations to different environmental conditions. I acquired a position at the Oceanographic Centre of Canary Islands (IEO), studying the physiological implications of rearing conditions on fish welfare. To continue, I focused my research on ecophysiology in fish early life history stages, including feeding ecology and the recruitment process, allowing me to gain a Senior Research position at Oceanographic Centre of Málaga (IEO). Finally, I have centered my research on the ecology and life history of fishes, particularly the early life stages. I have worked extensively on fish physiology and those biological and physical oceanographic processes affecting larval dynamics, population replenishment and connectivity. My research also includes specific aspects of the ecology of larval fishes including vertical migration, growth, survival, and feeding, together with rearing experiments under controlled laboratory conditions to calibrate some physiological parameters from wild populations. “-RLC- We have carried out four complete cycles, following the same water mass where we found thousands of SBT larvae, to study in detail the ecosystem and food chain associated with the habitat, which exceeds our initial expectations at the beginning of the survey.”

The Spanish Institute of Oceanography (IEO, CSIC), is a National Center of the Spanish National Research Council (CSIC), dependent on the Ministry of Science and Innovation, dedicated to research in marine sciences, especially in relation to with the scientific knowledge of the oceans, the sustainability of fishing resources and the marine environment. The IEO represents Spain in most scientific forums and international technology-related to the sea and its resources and has nine coastal oceanographic centers, five marine experimental aquaculture plants, 12 maritime stations, a receiving station for satellite images and a fleet made up of four oceanographic vessels, highlighting Ramón Margalef and Angeles Alvariño.