This is Part 1 of a 3 part narrative about the BLOOFINZ project in Indian Ocean (BLOOFINZ-IO) conducted on cruise RR2201 of R/V Revelle (January-March 2022). Part 1 provides gives an overview of the project scope and goals, some bluefin tuna background, and a brief introduction to the research team. Part 2 mainly deals with challenges faced on the expedition. Part 3 describes operational details of the cruise and how a very successful outcome was achieved despite the challenges.

BLOOFINZ is a project funded by the US National Science Foundation (NSF) that is designed to investigate many inter-related aspects of the ocean habitat supporting larvae of Southern Bluefin Tuna in the eastern Indian Ocean. The field portion of BLOOFINZ is being conducted during February 2022 on the research vessel (R/V) Roger Revelle. February, late summer in the Southern Hemisphere, is the peak spawning month for Southern Bluefin Tuna.

The acronym BLOOFINZ stands for Bluefin Larvae in Oligotrophic Ocean Foodwebs, Investigations of Nutrients to Zooplankton. Oligotrophic regions are the poorest areas of the oceans. Historically, they were considered “biological deserts” with slow plankton growth due to extremely low nutrient concentrations. We now know that is not the case. The dominant phytoplankton of oligotrophic areas are photosynthetic bacteria (not discovered until the late 1980s) rather than more typical larger algae, and these extremely tiny cells can grow well under low-nutrient  conditions. Generally, however, they lead to food webs with many layers of consumers that mainly recycle nutrients and inefficiently move energy to higher animals like fish. Despite this, adult
bluefin tuna migrate thousands of miles each year to place their young in such habitats.

To better understand the complexity of the larval tuna ecosystem, BLOOFINZ combines different disciplines of ocean study that are typically done separately –physical circulation,  biogeochemistry, fisheries biology, and food web ecology. Physical circulation may explain specific locations where adult tuna release their eggs or areas that get fertilized by nutrients mixed toward the surface from deeper depth. Biogeochemistry is involved because special forms of cyanobacteria can fix atmospheric nitrogen gas into a utilizable nutrient, in which case nutrient supply is not limited by physical mixing but by the biological nitrogen fixation process which requires high light and the micro-nutrient iron. The food web is important because larvae feed
selectively on zooplankton prey, and what they choose can make the transfer of energy to them more or less efficient. In addition, some intermediate plankton (mixotrophs) can operate both like plants (photosynthesis) and consumers (eating smaller cells), which can also make the food chain more efficient. All of these things are included in the Investigations of Nutrients to Zooplankton portion of the BLOOFINZ acronym, which will try to unravel the sources of nutrients to the food web and how they relate to ecosystem productivity and the availability of zooplankton food for tuna larvae.

The three bluefin species are the largest and widest roaming of the tunas. Atlantic (Thunnus thynnus) and Pacific (Thunnus orientalis) species are top predators in rich feeding grounds of the temperate and subpolar North Atlantic and North Pacific Oceans. Southern Bluefin Tuna (SBT, Thunnus maccoyii), the focus of this study, roams widely in cool rich waters of the South Indian, Pacific and Atlantic Oceans. Each year, adult bluefin tuna of all species leave their main feeding grounds and migrate long distances to spawn their young in small restricted ocean regions that are very warm and nutritionally poor (oligotrophic). 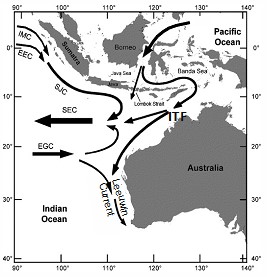 It is not known why they have evolved to put their young in waters with high risk of starvation (high-temperature metabolism and low food), as opposed to coastal waters that are just as warm with higher food, but it is believed to be a tradeoff to minimize predation losses to small schooling fishes (sardines, anchovy, herring) that are abundant in richer areas. Most bluefin spawning areas are also close to major poleward-flowing currents, like the Gulf Stream in the Atlantic and Kuroshio Current in the Pacific, which can function as superhighways to transport surviving young to high-latitude feeding grounds.

For SBT, the only spawning area in the world is the small triangle of ocean in the eastern Indian Ocean between Indonesia and northwestern Australia, the poleward flowing Leeuwin Current off of western Australia is  the transport route to take survivors to juvenile foraging habitat south of Australia.

With climate change, the upper oceans are expected to become warmer, more stratified and less productive (reduced upward mixing of nutrients from below). Juvenile and adult bluefin tuna may not be too greatly impacted by these changes, as they can regulate their body temperatures and follow food resources as they shift poleward. Their larvae, however, are the vulnerable stage of the life cycle that have to live in the upper ocean 25-30 m (75-100 ft) of areas that they do not choose and cannot escape if changing conditions reduce their ability to grow and survive. By the end of our study, we hope to understand what qualities of the SBT spawning habitat are most important for continued recruitment success of the species, and to what extent they may be impacted by climate change. But this is only one among many goals of the research. The BFT spawning region is in the area of the Indonesian Throughflow (ITF), the only low-latitude connection between major oceans. Excess heat from the western Pacific pours into the Indian Ocean through the ITF, making the Indian Ocean the fastest warming ocean over the past 20 years. Remote satellite sensing further indicates that the Indian Ocean accounts for much of the global decline in ocean surface productivity. Despite the ITF’s global importance, it (like the Indian Ocean generally) is very poorly studied compared to other ocean systems. The BLOOFINZ study is a regionally-focused effort that will address many fundamental questions of ocean biogeochemistry and ecology of this understudied area that go beyond tuna larvae.

Our project is a contribution to the International Indian Ocean Expedition II (IIOE-2), an international effort to advance studies of the Indian Ocean dynamics relevant to climate, biogeochemical cycles, ecosystems and fisheries. Our science team reflects that with a strong international contingent, including participants from Australia, Spain, France, Italy, Denmark, China, Nigeria and New Zealand, in addition to investigators from six US institutions (University of California, Florida State University, University of Hawaii, University of Miami, Duke University, Columbia University). Counting all of our passports, birth countries and collaborators, the BLOOFINZ science group has ties to 14 countries, including all continents except Antarctica. To get to know them better, each cruise participant has been asked to write a short blog introducing themselves and describing their research, cruise experiences or general musings.

Michael Landry is a Professor at Scripps Institution of Oceanography, UCSD. He is
lead-Principal Investigator of the BLOOFINZ-IO project and Chief Scientist of R/V
Revelle research cruise RR2201