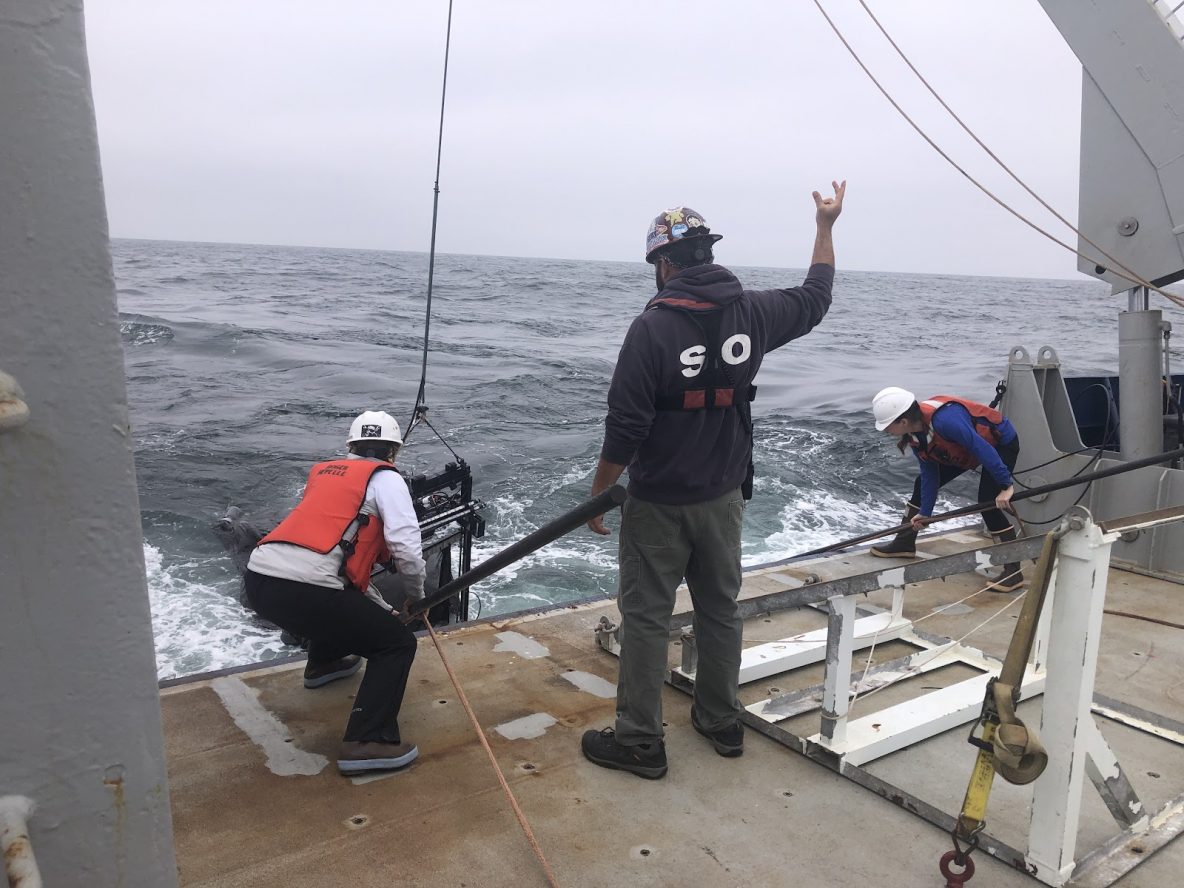 Among the net systems used by biological oceanographers, the MOCNESS ranks among the most involved and invaluable. Our MOCNESS (Multiple Opening and Closing Net and Environmental Sensing System) consists of a 1m2 metal frame with 10 stacked nets nested inside of it. The numerous nets are used to target specific depth ranges for sampling so that scientists can examine what kinds of plankton live within different layers in the ocean. The nets operate in sequence: as one net closes, the net directly above it opens. For instance, in our tows we keep the bottom net open as the net descends to 1000m, then we snap it shut, opening the next net to sample from 1000m-800m. As with the Bongo, the MOCNESS filters water into a cod end, so at the end of each deployment we have 10 cod ends each full of plankton goodies! 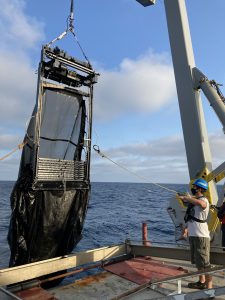 The top of the frame is loaded down with sensors that measure the physical environment as the net moves up and down the water column. Data are collected on temperature, salinity, oxygen, fluorescence, transmissometry and more. This allows scientists to place the different organisms in each net in a particular environmental setting. Counter to our land-based intuition, the ocean operates on 3 dimensions and more often the water above and below a single area has distinct properties and animals. In terrestrial ecosystems, a similar parallel would be a rainforest, where the canopy harbors unique fauna and light levels compared to the forest floor.

The beast of scientific innovation is also coupled with the Herculean task of deploying, operating, recovering, and maintaining the MOCNESS and later processing and analyzing the data it collects. Deploying and recovering the MOCNESS requires at least 4 scientists and a res tech who oversees the process. It all begins with “cocking” the MOCNESS: manually pushing the nets to the top of the frame and securing them to their trip controls so that they are poised to snap shut. Next, cod ends are secured (with some help from electrical tape) and a deck check is performed to ensure all instruments are functional. One scientist remains in the electronic lab to “fly” the MOCNESS and control the software while 3 scientists and the restech lower the MOCNESS into the water with the A-frame. 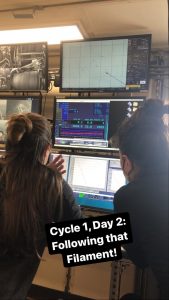 The MOCNESS is then dropped to depth and flown for several hours, with the scientists carefully observing and noting the data relayed from the sensors and winch to ensure smooth sailing. When the MOCNESS surfaces, a team of scientists and res tech recover the instrument, thoroughly rinse the nets for any plankters stuck in the mesh and begin hauling the cod ends to the lab for processing. Many times nets may become ripped in the process of towing, which requires further work. This cruise we even bathed, scrubbed and soaked in vinegar all the MOCNESS nets in an attempt to remove the booger-like phytoplankton that clogs our mesh. 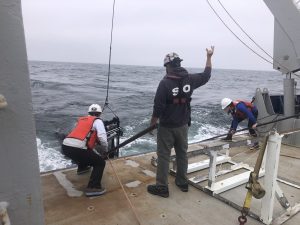 Processing the MOCNESS involves each cod end being separated into different splits for preservation or analysis. The preserved splits may be placed in ethanol if the scientist wants to examine the DNA of the organisms, or in formalin if they are more interested in the shape and morphology. Another split is further separated into size classes using sieves and filters to measure biomass and isotopes back on land. Repeating this process for ten nets requires stamina and a positive attitude as we work long and odd hours. Morale boosts through fun playlists, interesting conversations and chocolate-covered treats aid in carrying us through the finish line.

Despite the time and patience the MOCNESS demands, the excitement and mystery of opening each cod end and discovering what weird creatures we secured never gets old. Furthermore, these data provide an informative snapshot into the complex food web that sustains our coast.