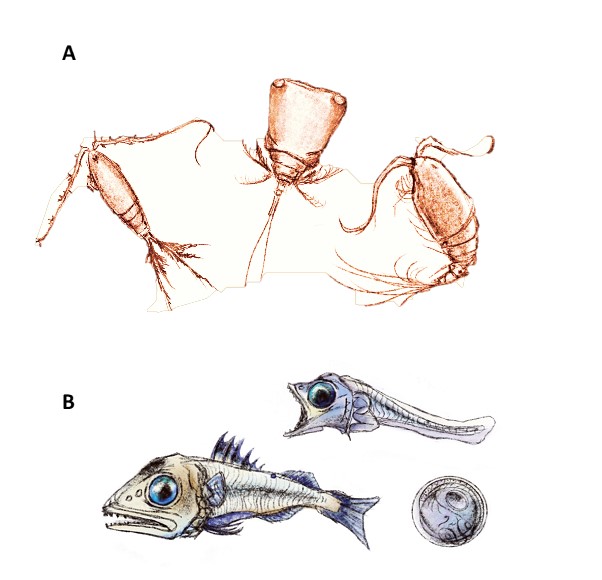 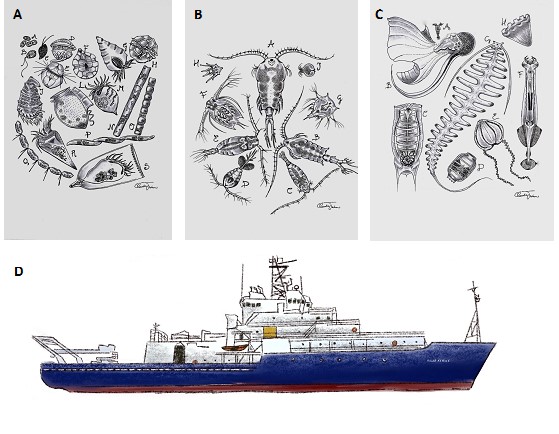 The Twitter plankton artwork (A, B, C) that got me on the research vessel Roger Revelle (D)!

My name is Claudia Traboni, I’m a PhD student in marine plankton ecology. I was born in Italy but I have spent the years of my doctoral training working at the Institute of Marine Science (ICM-CSIC) in Barcelona (Spain). My research focuses on the trophic interaction between zooplankton and mixotrophs. These unicellular planktonic organisms are able to survive by autotrophic and heterotrophic metabolism simultaneously, yet their role in nutrient transfer to zooplankton is poorly understood; (that’s why I was called to join the cruise!). However, the way I reached the BLOOFINZ team was rather peculiar. I would consider it a casual and very fortunate connection established through art on a social media platform. Let me explain how it happened. I am a passionate artist and one day I posted one of my plankton artwork on Twitter. Fortune was by my side when my drawing ended up on Moira Décima’s screen. She is an Assistant Professor in zooplankton ecology from the Scripps Institution of Oceanography in San Diego (USA). I reached out to her as I was curious about her research interests and after some emails and chats, she felt that I could be a good member of the science party to study mixotrophy during an upcoming cruise in the Indian Ocean, the BLOOFINZ research cruise.

Despite short field trips that I had attended in the past, this one has definitely been my very first long at-sea work experience as an oceanographer. I had a very exhausting trip from Europe, after four flights (other 3 cancelled and/or even denied to board) and several hours layover spent in airport transit zones. On January 6 I finally made it to Guam, a remote Island of the Micronesian Archipelago in the middle of the Pacific Ocean. Once settled, I spent the first 10 days quarantined in an hotel room, with (fortunately) a stunning view of Tumon Bay but very little outdoor activities and delivery food as the only option to have something to eat and stay safe. After testing negative to the pre-boarding PCR test, on January 16 I embarked on this journey together with the rest of the science party onboard the R/V Roger Revelle berthed at the Guam US navy base. An amazing adventure had just started.

View of Tumon Bay from (A) the hotel room in Guam and (B) the beach. C: happy Claudia finally onboard. 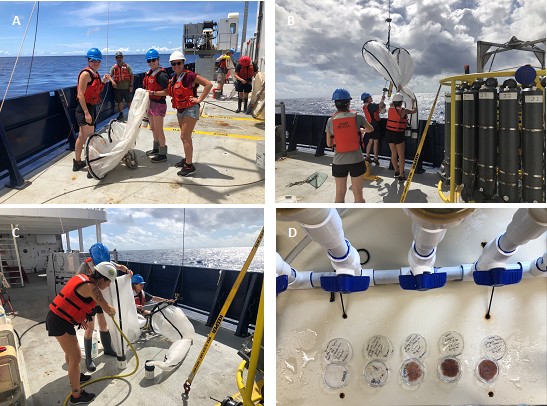 I was part of the Zooplankton Team together with Moira Décima and Grace Cawley with whom I shared most of my time and activities. Claire Davies and Rasmus Swalethorp  were part of the group too but they were often working in different shifts. During the day, I was mainly involved in routine zooplankton sampling and processing for dry weight and gut fluorescence analyses. At night, I was instead busy with the mixo-zoo experiments (see next section for detailed info). The operation I enjoyed doing the most was the Niskin bottle cocking and tag-lining the CTD for recovery. During zooplankton sampling, I liked preparing the bongo net, and it was also funny sometimes to drive the winch for the net tows and use the radio on the ship to communicate with the ResTechs while the net was in the water. I felt really like a mariner and an oceanographic super woman!

Sleeping in tiny beds, rolled by the movement of the waves, waking up and going to sleep during shifts became very confusing at some point. It was really an experience also to share my stateroom with Grace, who even became my Valentine on the day of my birthday. She has been a fun and supportive crazy friend to me. I enjoyed sunset talks with the other scientists and members of the crew. Overall life onboard is hard to describe, and despite some uncomfortable situations, I would definitely do all this again.

As I mentioned earlier, I came here on this boat to study mixotrophs (also known as mixoplankton) and their relationship with zooplankton, copepods in particular. The amazing fact about mixoplankton is that they are ubiquitous unicellular organisms that can exist as autotrophic (as phytoplankton) and heterotrophic (as protozooplankton). This means they can behave like plants doing photosynthesis and predate other organisms like proper animals, resembling terrestrial carnivorous plants. Mixoplankton occur in all oceans and seas and represent, in most regions, 50% of the eukaryotic biomass producing oxygen and recycling nutrients in the ocean. 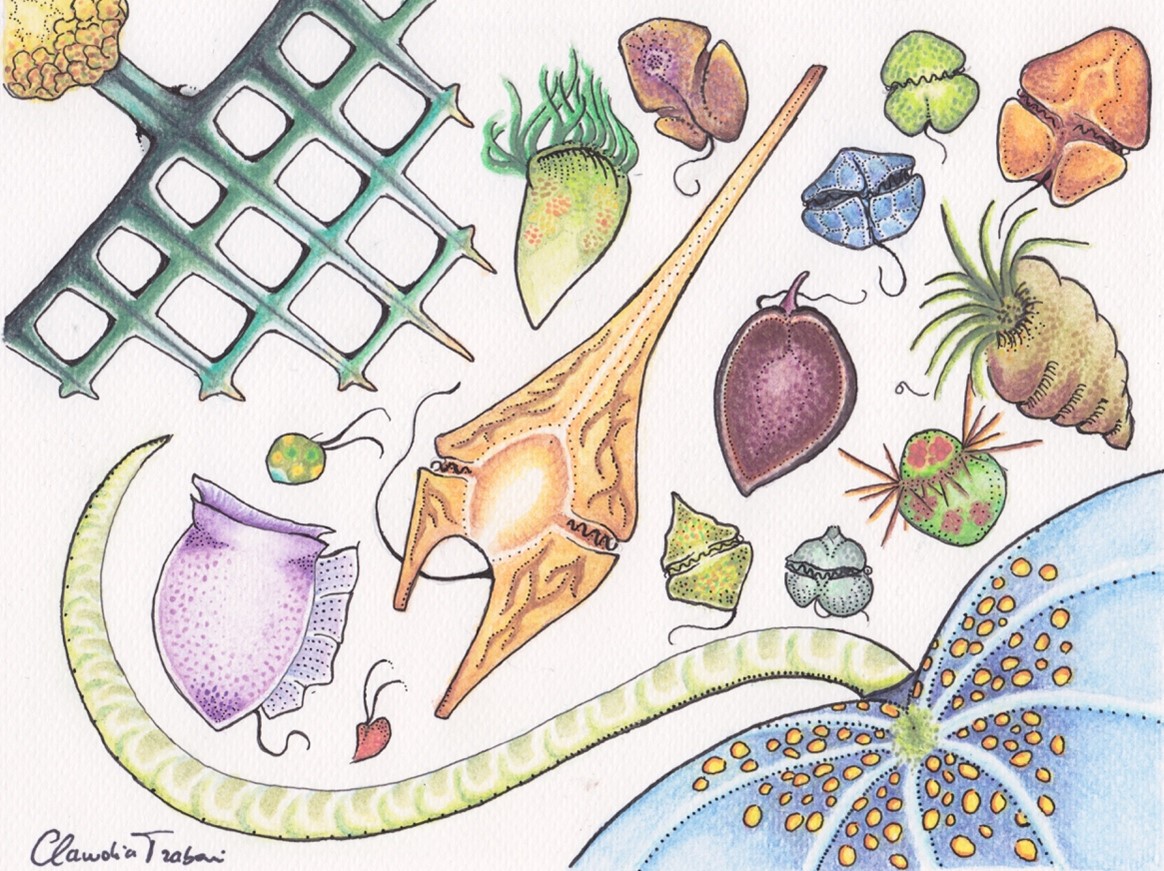 Some mixoplanktonic species including mostly (dino)flagellates, ciliates and radiolarians. Mixoplankton have been on the cover of Journal of Plankton Research since 2019!!!

Copepods, the most abundant zooplanktonic crustacean group, are often the key grazers on mixoplankton and are preyed upon by fish larvae such as the Southern blue fin tuna Thunnus maccoyii (the reason why we all came here for!). However, the importance mixoplankton have in copepod diet varies with the environmental conditions. It is, in fact, thought that more stratified, inorganic nutrient-limited (oligotrophic) ecosystems may be more likely inhabited by mixoplankton that can exploit multiple trophic strategies contrarily to upwelling nutrient-rich waters where diatoms (phytoplankton) seem to be the predominant group in the environment and as copepod prey.

This region of the Indian Ocean explored during the BLOOFINZ route is generally considered to be an oligotrophic ecosystem. Therefore, together with Grace and Moira, we planned a series of deck incubations in order to determine the abundance and grazing rates of protists (mixo- and protozooplankton) coupled with copepod feeding experiments. The ultimate objective of these experiments was to quantify the magnitude of the nutrient transfer mediated by mixoplankton to copepods versus the contribution offered by strict phytoplankton and protozooplankton. To do so, we adopted multiple approaches combining epifluorescence microscopy, flow cytometry, Chl a fluorescence, flow cam imaging and isotope labelling. We quantified ingestion by food removal method, and incorporation of nutrients through the different trophic strategies will be inferred by isotopic signals. We were mostly working at night where incubation started, and since copepods are nocturnal feeders, we did our best to match and respect the animals’ daily feeding rhythm.

Artistic representation of A) copepods and B) Southern blue fin tuna larvae and egg.

The moment of the experiments I liked the most was sorting out copepods for incubations because I could get lost in the world of live plankton. I spent 2 to 4 h at the microscope every day of the experiment, just looking at specimens and taking pictures. While screening for copepods to incubate, I bumped into other species by which I felt really attracted. I had never seen such a beautiful variety of species and shapes at the same time. I was amazed by the diversity and colors of plankton retrieved from our live tows.

I feel so excited about having participated to the BLOOFINZ cruise because I had the chance to live the oceanographic experience that I had always dreamt of. Throughout the cruise, I realized how hard the work can get to be during certain days. I felt very tired after nights and nights of computer and lab work and deck operations, but I could grasp how different it is to work at sea from the laboratory. I am glad Moira liked my post on Twitter that day, otherwise I would not have been able to share here my oceanographic tale.

Moments of life onboard and experiments. A: Claudia sampling water from the Niskin bottles and B: hugging the CTD on her birthday (Valentine’s day); C and D: Zooplanktonologist Claudia and Grace on deck setting up night incubations; Claudia during endless (E) washing and (F) microscope time; G: Zooplankton team + Estrella Malca from the Tuna team after the Continuous Plankton Recorder recovery; H: two enthusiastic young zooplanktonologists crossing the Equator! 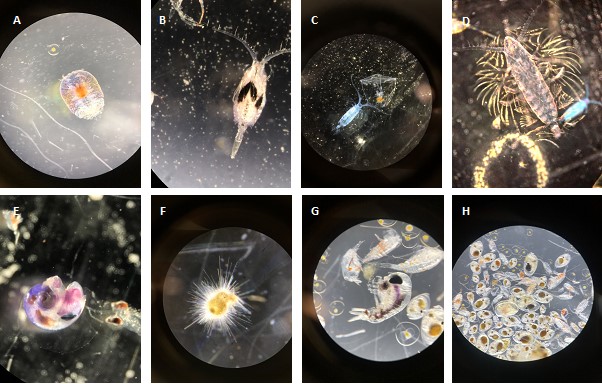