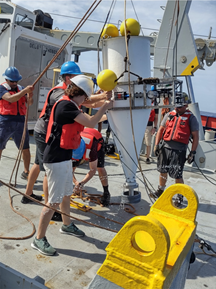 Quel voyage ! I’ve got the chance to join the BLOOFINZ cruise, my second cruise onboard R/V Revelle, but because of covid and travel restrictions, making it to the ship was never certain until I actually moved onboard. After having to change my flight in emergency because Japan suddenly closed its border, I left my country, France, at a time when Omicron covid variant cases were sharply soaring.  Finally, just after entering 2022 by crossing the international date line, I arrived in Guam to quarantine for 10 days.

One of the processes by which ocean sequesters atmospheric carbon dioxide is named the biological carbon pump. It mainly involves small (from tens of µm to several mm) particles: phytoplankton aggregates (also called marine snow) and zooplankton fecal pellets, mostly produced in the surface layer of the ocean. This process is at the core of marine ecosystem functioning and supports food webs on which depends top predators such as tunas.

Zooplankton and particles abundance as well as composition vary on the horizontal and vertical planes, impacting the functioning of the biological carbon pump. To measure particles and zooplankton abundance in situ (meaning directly in the water column), I use cameras called “UVP” (standing for Underwater Vision Profiler). Two different models of UVP are currently in use: the UVP5 and the UVP6. On both instruments, a light unit regularly emits a red light lightening up a known water volume, so the camera can detect the particles >100 µm in its field of view. At the same time, it records the pictures of particles >600 µm, clear enough to be later identified.

The UVP5 is fixed at the bottom of the CTD rosette and images particles encountered on the way down during each CTD cast. The UVP6 can be used for longer-term deployment, such as mooring lines. In my case, this camera was attached to a giant (170 cm high) torpedo-like. This setup, called VisuTrap, was deployed on the sediment trap array during each of the four lagrangian cycles (see other posts) at 150 m depth, and the ultimate goal is to measure particle flux. 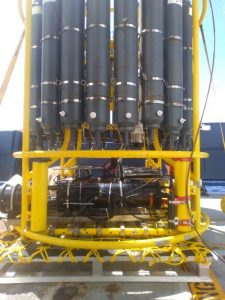 Left: The UVP5 fixed at the bottom of the CTD rosette. Right: The UVP6 attached to its sediment trap

Once data are collected, the particle profiles and the thumbnails of particles and organisms >600 µm are uploaded on the EcoTaxa database, where users can identify and annotate them, allowing to get abundance profiles of many planktonic taxa. 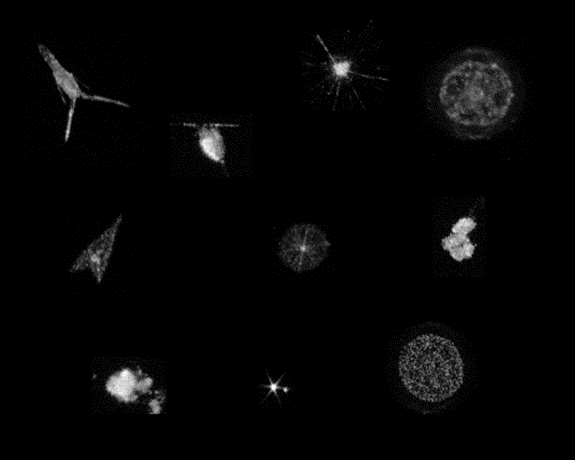 Images of particles and planktonic organisms recorded by the UVP6

Overall, more than 10,000 thousand profiles have been recorded in the world with the only UVP5 since its creation a decade ago, but the Indian Ocean is still far less sampled than the Atlantic and Pacific Oceans, and not at all is western Australia and the Argo basin. How thrilled I was then to see this area imaged for the first time! Unfortunately, the loss of the first CTD rosette and the UVP5, along with the ADCP and the Scripps Plankton Camera, cut my dreams short. To compensate for this loss, I fixed one of the UVP6 that I brought on “Mighty Mini”, our 12-bottle backup CTD rosette.

The UVP6 attached on “Mighty Mini”, the backup CTD rosette 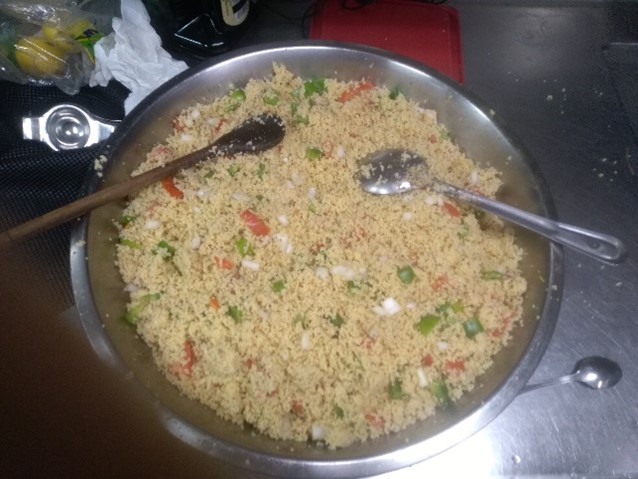 Cooking for about 50 people is much different than cooking at home!

Overall, in spite of the misfortune, I’ve learned much on this cruise, especially about chef Richard’s magic cooking tricks and about the most secret places of the ship during the pig hunt organized by the crew! All joking aside, coping with difficulties is full of lessons. I feel lucky and grateful to have been able to join such a trip, and to have enjoy the life onboard.

About Manon Laget — I’m a 2nd year PhD student in plankton ecology and biogeochemistry at the Laboratoire d’Océanologie et de Géosciences, in France. My research focuses on the role of Rhizaria, a zooplanktonic taxon, in the biogeochemical cycles of carbon and silica. I work mainly with UVP datasets and what I love the most in this job is that I can merge my passion for coding with my taste for field work.