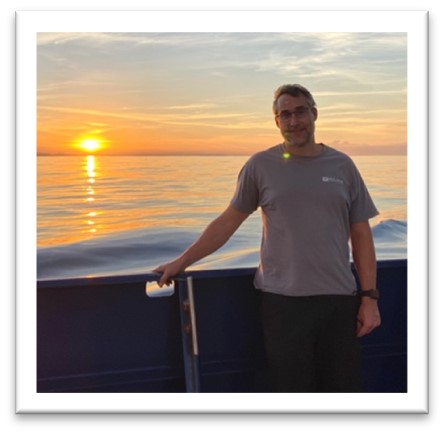 In 2017 I was approached by Mike Stukel and Mike Landry to be part of the BLOOFINZ project. Without hesitation I agreed – little did I know….

I am originally from Germany but my roots are now in the Sunshine State of Florida where I lead my own lab in the Earth Ocean and Atmospheric Science Department at Florida State University. I am a phytoplankton ecophysiologist by training and usually conduct laboratory experiments in which I artificially manipulate the environmental conditions of phytoplankton cultures to better understand their ability to adjust to these often stressful conditions. I also have an active field component to measure the productivity of phytoplankton communities in different environments. I am blessed to have been able to  conduct research in the North Sea (Germany), the Atlantic Ocean (Cape Verde), the Pacific Ocean (California Coastal Ecosystem), the Antarctic Peninsula (Palmer Station) and the Atlantic sector of the Southern Ocean. BLOOFINZ allowed me to study the Indian Ocean and the Indonesian Throughflow region.

Four(ish) years after submitting our proposal to the National Science Foundation, our container with all the gear finally left from Florida for San Diego to be unpacked again one month later in Guam on board of our blue research vessel – the R/V Roger Revelle. You can call it luck or caution but most of us made it on board without contracting COVID – which at that time was at its all-time high for new infections. A departure from Guam (rather than Darwin as originally planned) meant that we had an extra 20 days (return) transit time to our research area which let us to cross the equator, a special occasion for every sailors. The beautiful sunset followed by luminescence and an amazing starry sky made this equator crossing even more special. 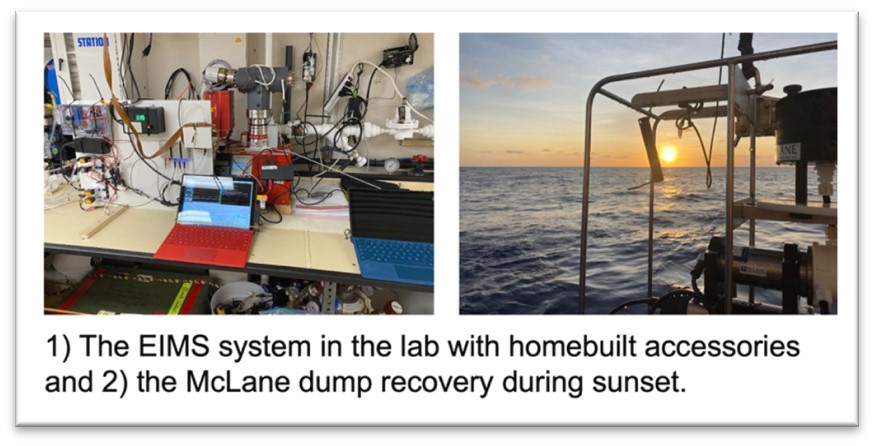 As mentioned, one of my tasks on this cruise is to sample for nutrients. Nutrients such as Nitrate, Phosphorus or Silica are required for phytoplankton cells to grow and subsequently build the base of the food-web. Without nutrients, there will be no phytoplankton, no zooplankton and no fish. Hence nutrients are extremely important and we need to know the concentration of these molecules to better understand ecosystem processes. Luckily, sampling is easy and Mike Landry took most of the samples from our CTD deployments (THANKS MIKE), my job got reduced to finding a suitable lab to analyze the samples and pay the bill. Biological N2 fixation is another way of phytoplankton to supply nitrogen to themselves or their kind, especially if no nitrate is available. Since we are in what is called oligotrophic waters, these are areas with extremely low concentration of nutrients, we do expect some of the productivity to be fueled by N2 fixation. In order to measure the fixation of N2 by specialized phytoplankton, we track a stable isotope of the N2 gas (15N) from the gaseous form which we artificially supply into the biomass. While this sounds relatively easy, it is work intensive. I brought my student Jared Rose with me to perform this work (he will tell you more about this part of our work here at sea). 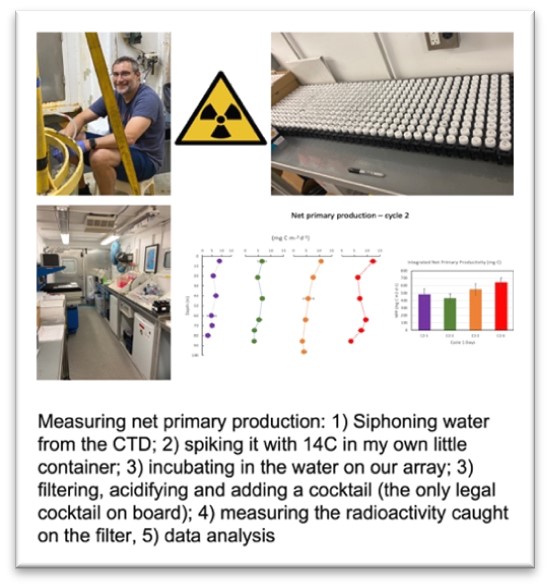 The productivity of the phytoplankton was measured with three different methods, each of which is measuring different kinds of productivity. First, we used the underway system (surface water is pumped from outside into the ship continuously) to measure the concentration of oxygen in comparison with a non-biological tracer which behaves physically similar to oxygen (Argon). An Equilibration Inlet Mass spectrometer (EIMS) is used for these measurements of net community productivity (NCP) –the productivity of the phytoplankton minus the respiration of all other organisms in the water. This mass-spec is very sensitive and can detect even the smallest changes in gas concentration. Unfortunately, I needed to operate on the instrument several times to be able to get it to function properly – and the environment at sea is not the best to do so (as told me via email from the manufacturer) – Despite the trouble at the beginning (thanks to nearly 10 days of transit all worked out well). Second, we measured the productivity within the water column (down to 60-90 m) by taking water from different depth, spiking it with an radioactive tracer (Carbon 14) and incubating it at the same depth on our incubation array. After 24 hours we pull the incubation array out of the water again (by hand) and measure how much radiocarbon was fixed by the phytoplankton. This measurement allows us to quantify the net primary production –the productivity of the phytoplankton minus its own respiration. For this measurement I have my own radio-isotope container on the aft deck to avoid contamination of the ship with 14C. Last but not least we estimated the primary production potential of the phytoplankton by incubating the cells from the flow through in a Fast Repetition Rate fluorometer (FRRF). This instruments measures light given off of the phytoplankton when excited with a specific color. The intensity of the emitted light is an indirect measure of the cells ability to create energy under specific light levels and will be used to calculate gross productivity. 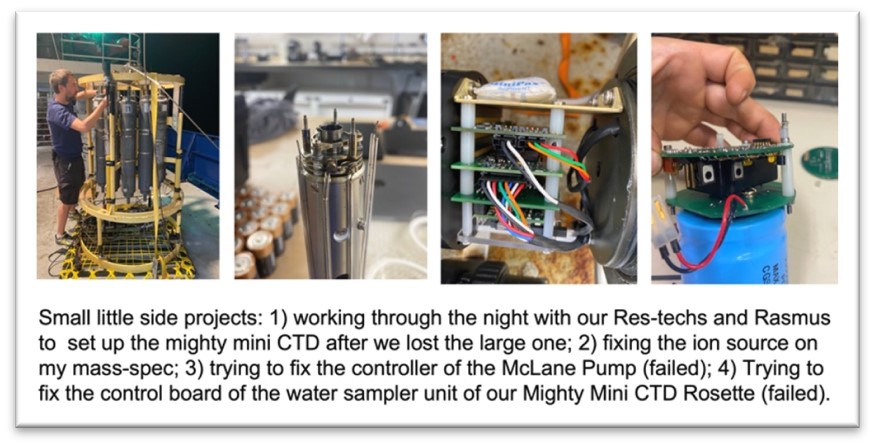 Next to these measurements I also supplied one of two in-situ water pumps. The McLane pumps are lowered into the water to a specific depth where they start pumping and filtering the suspended material from the water surrounding the pump. We unfortunately lost one of our McLane pumps due to a malfunctioning O-ring. Fixing the electronic part was unfortunately not possible, despite all the helpful and timely advise from the manufacturer (thanks McLane).

So now that you know my scientific program I also briefly wanted to talk about how all this is fit into my regular day on board (when not disturbed by the many catastrophic failures of certain equipment which let to frantic night-shifts of rigging up spares). My regular day started around 1PM to setup the McLane pump for deployment around 3PM. During the time the pump was in the water I usually aided my Mass-spec and prepared all experimental bottles for the night. If I was lucky and nothing needed to be fixed (which was seldom) I could get a valuable 2 hour rest time in after dinner and before I had to prep the CTD for the 11PM CTD cast to get our water for the N2 fixation experiments. At 2AM we deployed another CTD to collect water for the in-situ array experiments. By 4AM the whole array crew was ready to recover the old array and re-deploy the newly prepared experimental bottles. Directly after this we started processing the recovered samples followed by the 6AM CTD when I was able to receive more water for nutrients or for genetics samples. After breakfast (after 07:30AM) I was able to talk to my family (their evening time) and finally go to bed by 8:30AM just to wake up in time to good, bad or ugly news during our somewhat CURSED “Comprehensive Understanding of Responses of Southern blue fin tuna larvae to Ecosystem Dynamics” cruise (thanks Mike S. for coming up with this new cruise acronym).

Who knew back in 2017 that we would be plagued with a worldwide pandemic, a war in Europe and the failure of so many cruise relevant instrumentation. On the bright side – we collected many data for countless scientific papers! Looking forward to writing all this up – but more importantly – I am looking forward to seeing my family again!