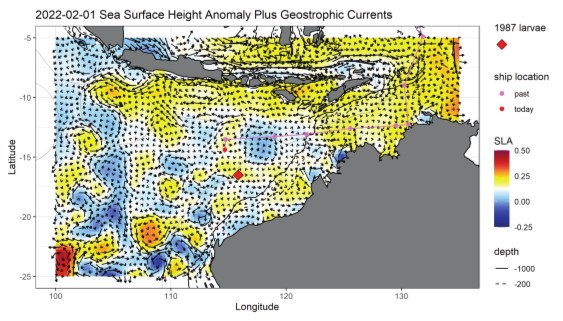 We meant to do a better job of maintaining current posts and progress reports, but good intentions fell to the wayside due to early circumstances and the pace of activities once things got started.  If you are reading this post, you are catching us in the final stages of the BLOOFINZ cruise, when the sampling and experiments that we planned to do (or were able to do) have been done, but still almost two weeks before the cruise will actually end in mid-March.  The cruise has faced some significant challenges but, with a little good luck in the balance, has also managed to achieve the vast majority of its objectives.  Here’s an overview of the challenges and their impacts.

COVID impacted us in many ways.  The cruise was originally scheduled for 38 days in January-February 2021, leaving-returning to Darwin Australia.  In addition to the delay of one year, the time devoted to the cruise expanded by over a month due to COVID protocols and added transit to avoid Australian border closure.  We began in Guam (western Pacific, Northern Hemisphere) at the beginning of January with pre-cruise hotel isolation and multiple testing over a 2-week period, then took a long transit to our Indian Ocean, Southern Hemisphere study region and will eventually have another long transit back to Guam.  The other major COVID cost was people.  Four senior scientists pulled out of the cruise in late December due to conflicts of the cruise timelines with their academic and personal responsibilities or concerns about long quarantine requirements to return to their countries after the cruise.  Travel during the Omicron-variant holiday surge also took a toll.  Seven of our group of 26 scientist traveling to Guam contracted COVID enroute.  Four recovered in time to make it to our one-week delayed departure, but three did not.  In the end, we sailed with 7 fewer scientists than expected.

Winches and CTDs are the main ship-provided means of sampling the ocean.  Winches payout and retrieve wire cable from large spools to lower instruments or tow nets through the sea.  CTDs (a Conductivity-Temperature-Depth recorder in a frame with other attached instruments and water collection bottles) are packages that provide continuous profiles of salinity (salt), temperature, pressure, oxygen, phytoplankton chlorophyll fluorescence and many other properties as it is being lowered, then allows water samples to be taken at any depth in bottles that are closed electronically from the ship’s console.  With that introduction, the story of our winch and CTD woes is told in the collection of images below.

Picture “A” is our original CTD.  It has 24 bottles of 10.4-liter volume each and is bristling with $400,000 of instruments, about half of which are borrowed from colleagues at the Universities of Hawaii, Alaska and Scripps to image particles, plankton and make acoustical profiles of water circulation.  This CTD is in a “smart dock” at the end of an arm that will gently pick it up, move it off the ship and over the water, where the winch cable lowers and retrieves it.  On 2 Feb, the CTD winch ran amok during recovery and pulled the CTD at high speed into the docking head, breaking the cable.  The CTD package was lost, but fortunately this happened over water, not the ship with people underneath.  Picture “B” is the replacement CTD assembled during the night with a spare frame, backup instruments for basic measurements, some old bottles and parts.  It is attached to the hydrographic winch cable in the usual CTD working area (starboard – right side) but now requires two people to control it with ropes as it is moved from the ship over the water and back (Matt is manning one of the ropes as Caitlyn directs the deployment).  This CTD has only 12 bottles that are smaller than the original, so two casts are required to collect less than the same amount of water as one original cast.  On 7 Feb, another key piece of ship equipment, the hydrowinch, also fails and both it and the CTD winch are deemed unusable for the remainder of the cruise, which has barely begun.  In image “C”, the replacement CTD is then moved to its new home at the stern of the ship, where yet an additional person is required to run the A-frame each time the CTD is deployed and recovered. 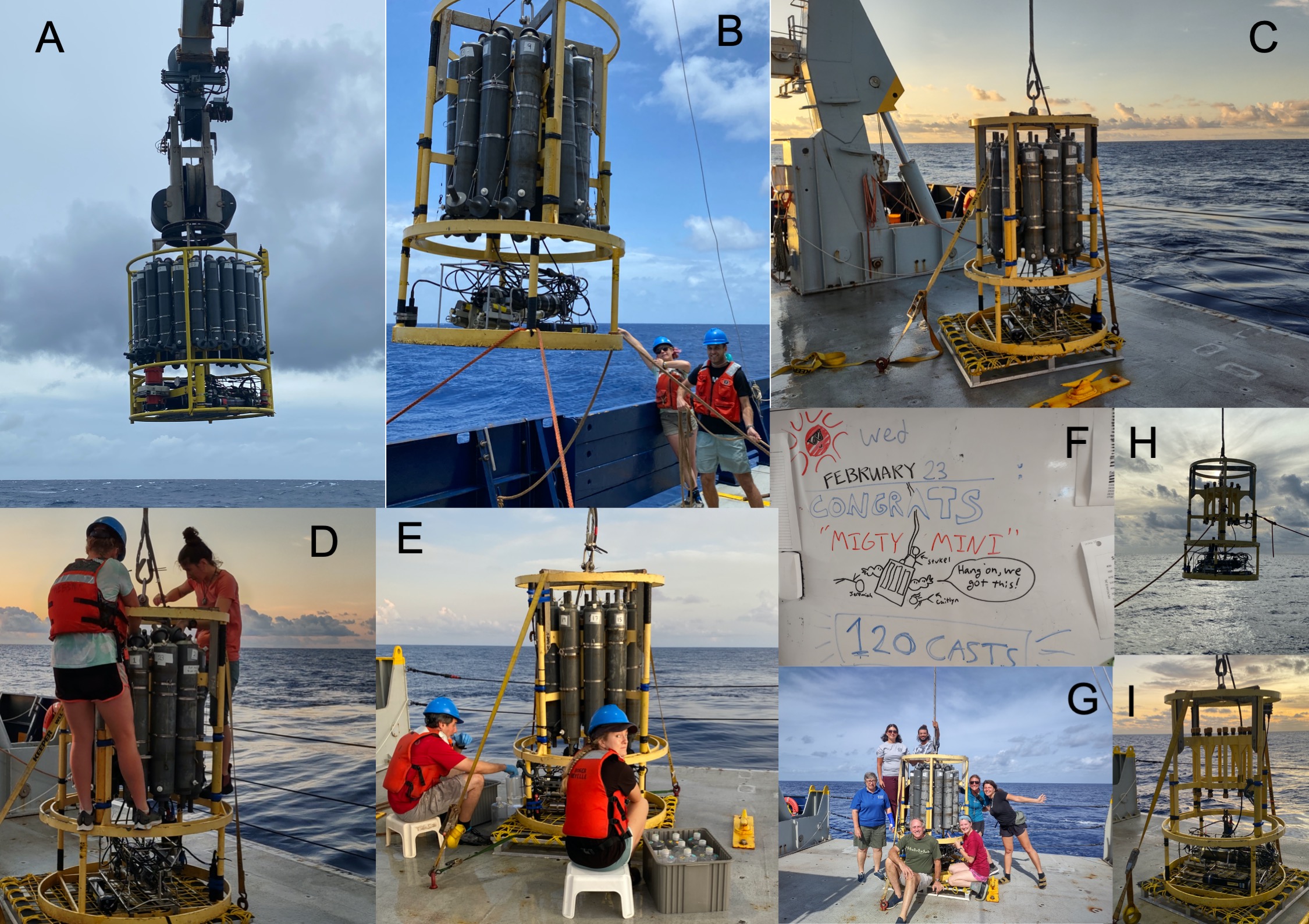 Despite its diminished size and capability, “Mighty Mini” rises to the occasion and becomes a symbol of resiliency and our determination to make best of less.  In “D”, Moira and Caitlyn set the bottle triggers for an upcoming cast.  In “E”, Mike and Natalie sample water collected by Mini.  In “F” (morning of 23 Feb), Mighty Mini receives a congratulatory salute on the bulletin whiteboard for having successfully completed 120 casts (oh-oh).  In “G” (afternoon of 23 Feb), Mini gets a sendoff for her deep dive to collect microbial DNA and nutrients at 5000 m, a 4.5-hour operation (counter-clockwise from upper middle – Alejandro, Estrella, Lynnath, Mike, Grace, Claudia, Caitlyn).  Her bottles never fire.  When she returns to the surface, Mini’s pressure-cased controller is disassembled and a small seawater leak is found, with evidence that it had been ongoing for some time.  Caitlyn, Sven and Mike work through the night to clean the circuit boards with alcohol and Q-tips and solder a loose component, but Mini’s bottle days are done.  “H” and “I” show the new “Skinny Mini”, the see-through CTD, as she finishes the cruise, still able to produce profiles, but not to collect water for experiments.

The disfunction of the ship’s two main sampling winches have related impacts.  Net tows are moved to a small portable winch on the Main deck with a Kevlar, rather than steel, line.  A clamp for the nets eventually weakens and breaks the line, and the large fast net (the “Black Widow”) for catching large evasive larvae is lost, along with the only hydrodynamic depressor weight for towing.  Both CTDs and net tows now also require science personnel to do additional jobs that were not previously necessary or done by the ship’s crew.  The loss of Mini’s bottle controller is the biggest hit, requiring a dramatic shift in science plan to compensate for the inability to collect large amounts of subsurface water for experiments.

The next Overview will focus on the study plan, operational details and outcomes.